In addition to the last article, I believe this to be the perfect time to do a dossier on the Ziegfeld Theatre in NYC. 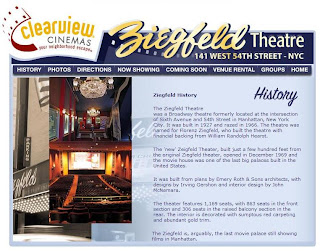 On December 17, 1969, a few hundred feet from the original Ziegfeld Theatre (razed in 1966), a new Ziegfeld Theatre opened as a single-screen movie house. Located at 141 West 54th Street, it is one of the last large-scale movie palaces built in the United States. Constructed by Emery Roth & Sons from designs by Irving Gershon and sumptuous red-carpeted interior designs by John J. McNamara, it has 1,131 seats (825 seats in the orchestral section and 306 seats in the tiered rear section). It has been used for 70mm world premieres and big-event press screenings, such as the November 1977 opening of Close Encounters of the Third Kind. The theater underwent extensive renovations in the late 1990s. It was a centerpiece site during the 2008 New York Film Festival because of reconstruction work at Lincoln Center that year. During the 2000s, digital projection was installed at this theater.


In 2010 the Ziegfeld is operated by Clearview Cinemas and remains New York's leading commercial film venue. The theater is the largest single screen cinema in New York and is regularly the site of film premieres and gala events. (Source: Wikipedia) 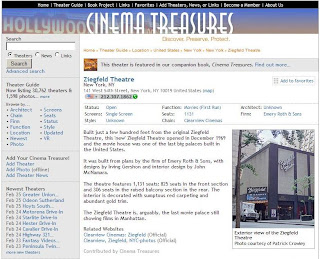 "Ziegfeld Theater Will Be Razed for a Skyscraper" By Louis Calta, published by the New York Times on August 05, 1966.